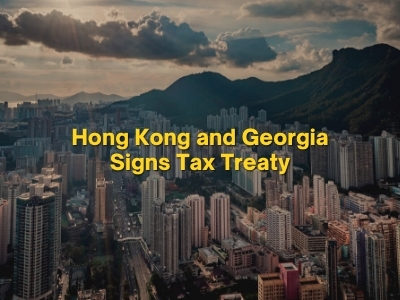 Hong Kong is widely known for its low tax regime and makes an intentional effort to keep things that way. Thus, it is logical that when Hong Kong opens its trade to other nations, low tax is what keeps overseas companies staying put in the special administrative region. Thus, after agreeing to a free trade agreement with Georgia, Hong Kong signs a tax treaty with Georgia. The country is the latest addition to Hong Kong’s extensive tax treaty network.

The tax treaty that Hong Kong signs with Georgia are to avoid double taxation in either economy. This is the 45th CDTA agreement that Hong Kong has concluded. With a comprehensive double tax avoidance agreement in place, investors can make a better assessment of their potential tax liabilities. Tax liabilities may come from cross-border activities, indirectly promoting economic and trade connections between Hong Kong and Georgia. Both parties are highly engaged in ease of business and extensive free trade networks. Georgia is climbing up the ranks of ease of doing business, and it is actively participating in the Belt and Road Initiative. Georgia’s strategic location of being between Europe and Central Asia makes it a strong point for a trade partner. In 2019 alone, the merchandise trade between the two parties was almost HK$260 million. Thus, as Hong Kong signs a tax treaty with Georgia, it is an outlook for a better future.

Within the CDTA between Hong Kong and Georgia, any tax paid in Georgia by Hong Kong companies will be utilised as a credit against payable tax in Hong Kong on the same income. The same concept applies to Georgian companies based in Hong Kong. For tax paid in Hong Kong will be allowed as a deduction from the tax payable on the same income in Georgia. Besides income tax, there are more tax relief arrangements within the CDTA. One is for withholding tax rates for Hong Kong residents. Georgia is putting a cap of five per cent withholding tax rate on interest and royalties for Hong Kong residents. Another tax relief deal regards profits from international shipping. Georgia will not tax Hong Kong residents earning profits from international shipping transport in Georgia.

The CDTA will only come into force when both parties complete their ratification procedures. It may take a while to ensure every process undergoes comprehensive ratification to avoid confusion. The mechanism of tax credits and deduction, as well as reliefs, should undergo a detailed review. Once all is concluded, both parties can begin to enjoy the provisions under the tax treaty. Business and companies of Hong Kong origin and vice versa should take note of such matters so as not to be taxed twice, whether in Hong Kong or Georgia. Should your company have queries of how things work with a CDTA in place, feel free to contact us?