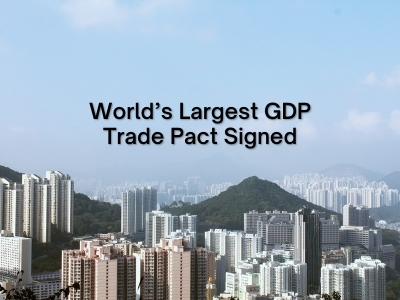 Road to recovery for China and 14 other partner countries with RCEP trade pact signed ancillary to ASEAN summit.

The Regional Comprehensive Economic Partnership (RCEP) was signed on Sunday, the 15th of November 2020, at a separate trade meeting alongside the ASEAN summit. It saw China and 14 other countries come together to ink what is now being hailed as the world’s largest trade pact in relation to gross domestic products (GDP).

The Association of Southeast Asian Nations (ASEAN) conference is being hosted by Vietnam this year and is mostly online, in line with Covid-19 safety protocols. The RCEP is a free trade initiative backed by China and covers almost a third of the global economy. It was virtually signed by the ten members of ASEAN, along with Australia, China, Japan, New Zealand, and South Korea.

The pact is seen as a proactive hope towards mitigating the fallout of the pandemic’s economic cost. Most partner countries are battling severe outbreaks, and their economies have taken a brutal beating. The third quarter of the Philippines’ economy shrank 11.5%, while Indonesia is in recession for the first time in two decades. The RCEP is perceived as the best chance to revive and reinvigorate flagging economies and promote positive growth.

Initially proposed in 2012, the RCEP currently targets trade and intellectual property. The pact is aimed at lowering tariffs, establishing better cost control as well as streamlining import-export requirements. All partner nations should have a hassle-free movement of trade within the bloc.

RCEP aims to do away with the need to adhere to multiple requirements for each country. RCEP will cover over two billion people and approximately 30% of the world’s GDP. However, labour rights and environmental protection are currently not within the ambit of the pact.

Voicing concerns about the impact of cheap Chinese goods saturating the market, India declined to be a part of the agreement last year. India also did not attend the virtual signing ceremony, although it can sign up later. While RCEP will indirectly benefit American multinationals via member nations, the pact itself does not include the United States and its two trillion USD in regional trade.

Considered a concrete extension of regional geopolitics, the pact effectively increases China’s sphere of influence within the bloc and allows it to dictate regional trade rules. It is seen as a coup that sets China up as the preferred alternative to the failed US-led trade initiative, the Trans-Pacific Partnership (TPP).

The TPP is succeeded by the Comprehensive and Progressive Agreement for Trans-Pacific Partnership. This deal has potential benefits for the US but is not considered a priority. This is due to TPP’s overall negative outlook based on Americans’ possible loss of employment to Asian countries.

Analysts and experts believe that the trade pact signed positions RCEP as the thin edge of the wedge that is part of China’s Belt and Road Initiative. The ‘Belt and Road’ is a mega-investment project from China aimed at global monopolization of infrastructure and influence.