Land Ownership in Hong Kong – Information That You Need to Know 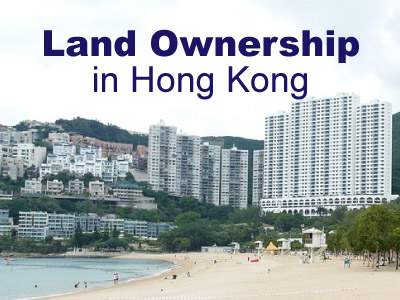 Land in Hong Kong is owned by the Chinese government and the Chief Executive of Hong Kong has the power to grant leases and state land to members of the public for a limited amount of time.

When China took back control of Hong Kong in 1997, it was legally agreed that all land in Hong Kong would be on a lease from the Chinese government for 50 years until 2047.

The Chief Executive of Hong Kong can thus grant leases on land by:

A “land owner” in Hong Kong therefore leases land from the Government for a long period of time (usually 50 years).

The Hong Kong property market is known for being expensive in the world due to its dense population on a city-island state. Government initiatives such as land reclamation projects and smarter urban planning have helped keep prices lower in certain areas.

There are various ways of owning property in Hong Kong:

Sole ownership is when a property is owned by only by one individual and they have full legal right to manage their property as they please.

Joint ownership is when two or more people purchase and own a property together. This type of ownership is usually more common as property in Hong Kong is expensive and it is easier to share the financial burden with another individual. There are two main ways joint ownership can be done: