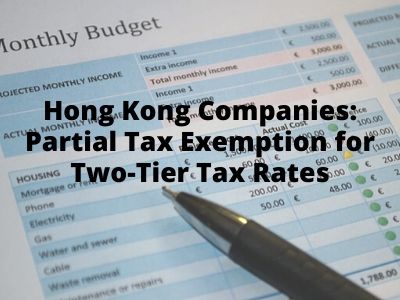 Corporations and unincorporated businesses in Hong Kong can pay lower profit tax rates under the two-tier tax rate for the first $2 million of assessable profits.

All Hong Kong taxpayers are subject to the same business tax rate for either a corporation or unincorporated business irrespective of their residential status. However, permanent or temporary residents of Hong Kong, except a person under the age of 18 (unless both his parents have passed away), may obtain financial relief from the standard rate of tax on their profits and income by electing to be assessed under Personal Assessment. This relief is offered where the tax computed under Personal Assessment is less than the aggregate amount of the tax charged separately under profits tax, salaries tax and property tax.

Profits Tax Rates can be divided into the following:

The applicable two-tiered tax rates are as follows

Concessionary tax rates at 50% of the normal profits tax rate may be applied to:

Certain enterprises will be excluded from the two-tier profits tax rates in order to avoid any double benefits.

It is also important to note that any taxpaying entity that incorrectly declares that it has no connected entity or has no other connected entity that made an election for two-tiered profit tax rates will be subject to heavy penalties for making an incorrect return without a reasonable excuse.