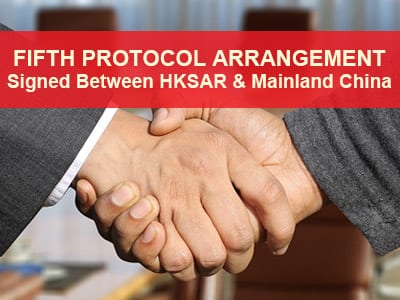 Hong Kong has signed the Fifth Protocol to Arrangement with Mainland China to avoid double taxation. The agreement is between the Hong Kong Special Administrative Region (HKSAR) Mainland China.

The agreement is set to deliver some tax relief to eligible teachers and researchers based in Hong Kong and the Mainland. This is turn is expected to promote further exchange of talents, co-operation and training between the two countries. Both countries will mutually benefit, with a boost in development within the Guangdong-Hong Kong-Macau Greater Bay Area.

Purpose of the Fifth Protocol Agreement Between Mainland China and HKSAR

The purpose of the agreement between the Mainland and HKSAR is to avoid double taxation. It is also aimed at preventing fiscal evasion in terms of taxes on income. The Fifth Protocol includes research and teachers in the Arrangement. A qualified researcher or teacher based in either country can now engage in related activities on either side. The income where the teacher or researcher is employed must be subjected to tax.  However, they will be exempted from taxes on both sides for a 3-year period. This is applicable if their income has already been subjected to tax.

The Fifth Protocol also intends to thwart tax treaty abuse. This will guarantee that the Arrangement is compliant with the latest international reporting standards. Once the ratification procedures have been successfully completed by both countries, the Fifth Protocol kicks in. With the signing of this new Arrangement, there will be greater certainty on tax liabilities for those involved. It is also optimistic that the Arrangement will further strengthen bilateral investment and trade.