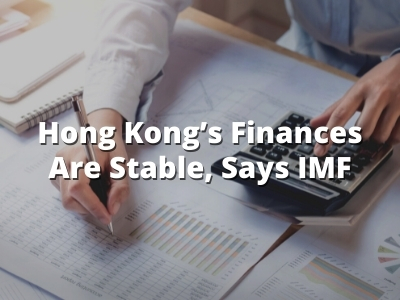 Factors that have contributed to Hong Kong’s strong standing in the IMF’s report include prudent policies, strong regulatory and supervisory frameworks, a sound macroeconomic system and a resilient financial system. The IMF conducted a comprehensive assessment of the financial system in Hong Kong, stating that its sensible and macroeconomic policies were the key buffers that helped it cope with the current slowdown in the economy. It also prepares Hong Kong for any future shocks that may come.

The IMF confirms that Hong Kong’s financial stability is resilient enough to withstand extreme stress scenarios. The IMF concluded this after performing rigorous stress tests before releasing the report.

The IMF acknowledges that Hong Kong is a major international financial centre and is also one of the world’s largest financial sectors in the world. The banking system’s assets are equivalent to approximately 9.5 times its Gross Domestic Product (GDP). Hong Kong’s banking system is a major contributor to several global systemically important banks. In 2019, its global asset and wealth management centre boasted assets under management amounting to 10 times its GDP.

The positive outlook from the IMF’s report clearly highlights the Governments long-standing effort and hard work to help safeguard financial stability. The Hong Kong Government continues to reinforce its core strength, identify areas of growth and focus on its unique advantages. Every effort has been made to ensure the city’s long-term prosperity and competitiveness.

With the establishment of the Insurance Authority in Hong Kong, the insurance sector has been strengthened even further. Regulation and supervision continue to remain sturdy. The Financial Institutions (Resolution) Ordinance introduced in 2017 has also strengthened and safeguarded the financial system significantly.

Hong Kong is also welcoming efforts to address climate change risks. This includes implementing climate-related mandatory financial disclosures by 2025. Helping to promote stress testing in its financial sector that is focused on climate and the adopting of Common Ground Taxonomy is also part of its climate change efforts.

With the rapid development of the Fintech industry, Hong Kong is in a prime position to help develop and promote the city as Asia’s Fintech hub. The IMF’s report offered several recommendations to further enhance the financial system. The Government and Hong Kong’s financial regulators will be studying these proposals with careful consideration and move forward appropriately.