The Hong Kong Government Provides for People in Need

People’s Struggles Are the Government’s Responsibility 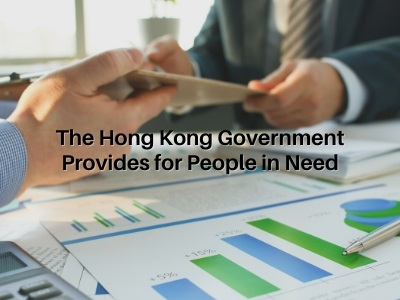 Across the globe, nations worldwide are challenged by the yet-to-end pandemic Covid-19. The struggles are real as the first line of defence is to stay at home, away from crowds. Hence, once-bustling cities with lively business scene have significantly slowed down. Thus, ever since the first quarter of 2020, companies are struggling to keep afloat, retain their employees and persevere. More companies are going through downsizing, some eventually closing shop altogether. Employees have to tolerate layoffs and stomach unexpected unemployment. People, in general, are feeling the sting from all angles, be it society, health and economic aspects. Hence, the Hong Kong Government provides for people in need in many ways to help sustain a living within the current situation.

With over $300 billion of allocation through the Anti-Epidemic Fund, the Hong Kong Government provides for people in need through targeted relief measures. Almost all segments of society and industries have received some financial assistance. Some are in rebates and exemptions, and others may receive or apply for one-off cash assistance. Despite the amount, the Hong Kong Government have to take into account its overall fiscal position carefully. That said, some ideals have spoken up about withdrawing from the Mandatory Provident Fund (MPF) to help sustain scheme members’ living condition. The idea of taking money from the MPF scheme is also to take it as a relief measure for contributing members.

The Mandatory Provident Fund was established to assist the working population in saving for their retirement. Members begin contributing in 2000 and have now accrued benefits of at least 20 years. The allowed withdrawal is at 65 years old. Over time, the value of the contributed amount will grow and provide a safety net for retirees in the future. Hence, allowing for early withdrawal of the MPF will defeat its original purpose of saving up and growing the value for retirement. Some may say that it is only for contingency purposes or to cope with short-term financial needs. Nevertheless, any withdrawals will interfere with value growth of the retirement accounts. Hence, it is not advisable for anyone to withdraw from the MPF, even given the current circumstances to ensure the success of its purpose.

With the economic downturn happening worldwide, the Hong Kong Government is doing their very best as they could. The government launched a Cash Payout Scheme to each Hong Kong permanent resident aged 18 or above. To date, the scheme has benefitted 6.3 million eligible citizens. After such payout, the government is wiser to exercise fiscal prudence and preserve financial capability in meeting anticipated and unforeseen needs. Thus, it is critical for the Hong Kong Government to maintain a healthy level of financial reserves to ensure monetary stability. This is to help weather the global economic downturn and come about just enough to restart the economy, if not stronger and wiser.

Through the Budget, the Hong Kong Government provides for the people need with its 100% salaries tax reductions. For tax under personal assessments, also get to enjoy a total reduction on a one-off basis, though subject to a capping of $20,000 per case for 2019/20 assessment year. Both tax reductions are benefitting about 1.95 million taxpayers.