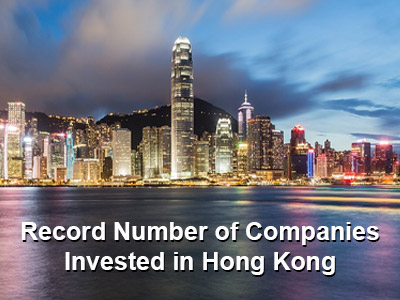 Invest Hong Kong (InvestHK) has announced that it facilitated 487 overseas and mainland Chinese companies to set up or expand in Hong Kong in 2019, setting a new annual record for the number of companies they assisted which represent a year-on-year increase of 11.7 per cent. The total number of jobs thereby created rose by 14.1 per cent compared with year 2018.

A survey of the companies facilitated by InvestHK found that more than 27 per cent indicated that Hong Kong will continue to play an important role in the economic development of China due to its status as an international hub. Companies chose to set up business in Hong Kong to fully benefit from the opportunities given by the Guangdong-Hong Kong-Macao Greater Bay Area development and the Belt and Road Initiative.

These assisted 487 companies also come from a broad spectrum of sectors, with 106 companies from the innovation and technology sector, followed by transport and industrial (65), tourism and hospitality (60), and fintech (57). The number of start-ups was 70 which represented 14.4 per cent of the total companies assisted.

InvestHK’s Director-General of Investment Promotion was delighted to see the continued increase of companies investing in Hong Kong, and said, “2019 was another record year for InvestHK in terms of the number of companies assisted and the number of jobs created by those companies. Hong Kong continues to attract overseas and Mainland investors because of its core advantages and emerging business opportunities, especially in the light of the latest developments in the Greater Bay Area and the Belt and Road Initiative,”

“Looking forward to 2020, notwithstanding the uncertain global and local economic environment, we will continue to strive to attract foreign companies, ranging from entrepreneur-led ventures to multinationals, to set up a presence in Hong Kong. A special focus will also be put on attracting innovation and technology companies in line with the Government’s policy objectives,” he added.

InvestHK is a department within the Hong Kong Special Administrative Region Government which is in charge of attracting foreign direct investment and supporting overseas and mainland Chinese businesses to set up and expand in Hong Kong.

It also provides free advice and customised services for overseas and Mainland companies.