Hong Kong: Vouchers Worth Up to $5000 to Be Distributed 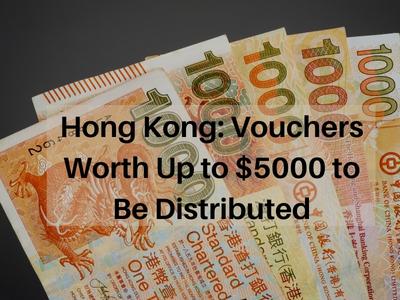 The Government of Hong Kong will distribute consumption vouchers worth $5000 in two installments. Announcing the scheme under the second phase of the 2022 Consumption Voucher Scheme, the Financial Secretary addressed the progression of the scheme in a press conference. The Secretary specified that eligible citizens who qualified for the voucher can now claim it on two more platforms. The platforms are BoC Pay and PayMe under HSBC, bringing the total number of outlets from which the voucher may be claimed to seven, increasing accessibility to people.

In the new phase, existing patrons of the scheme will receive an option to change their stored value facilities in this phase if they register online for one month, from June 23rd to July 23rd, 2022. Newly eligible people may apply online within the same timeframe to qualify for the scheme, even in the second phase. Voucher receivers that do not wish to change their stored value facility may continue using their preferred facility with additional registration.

Secretary Chan said an estimated 300,000 to 350,000 people could utilize the voucher from the relaxed eligibility criteria. This costs the Hong Kong government around $1.5 to $1.7 billion, a feat they may comfortably sustain. The reasoning behind the Consumption Voucher is to increase people’s spending ability. Subsequently, this stimulates the economy and grows GDP, an act supported by the public with rising global inflation. Since the government can afford the scheme, and there is a need to stimulate consumer spending, the move of adding more beneficiaries will help the economy and benefit consumers overall.

People who have exited the country indefinitely will not be able to claim the vouchers under the scheme. The government will examine if a person has been residing in Hong Kong from June 18th, 2019, to June 2022. The authorities will also check if the individual has had to leave the city for reasons like working or studying.

Furthermore, people who have made requests of withdrawal of or any benefits from their Mandatory Provident Funds (MPF) as per Occupational Retirement Schemes before 65 years old because they are departing the country will also not qualify for the voucher scheme.

The payments to consumers will be awarded in two installments according to their beneficiaries. Octopus users will receive three payments starting on August 7th and October 1st, collecting $2000, respectively. If total spending has exceeded $4000 between November and March 2023, the remaining $1000 will be credited to them on the 16th day of the following month. Those using the other beneficiaries will receive $2000 on August 7th and the balance of $3000 on October 1st, which they will have to spend before the expiration date of February 28th, 2023.

Liked what you read? You can follow 3E Accounting Hong Kong’s website for more latest news in Hong Kong.