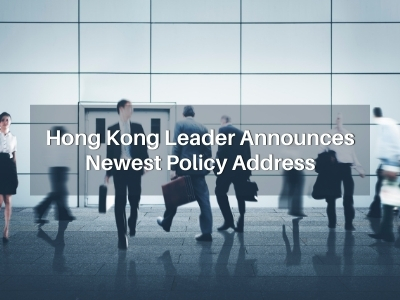 The latest policy address was delivered by Hong Kong’s Chief Executive – Carrie Lam highlighted some of the most crucial aspects and urgent priorities of the Government at the Legislative Council. Since taking office back in 2017, this has been by far her longest policy blueprint, which called attention to Hong Kong’s relationship to Beijing, adding that she will be continuing to strengthen the ties despite having mixed reception from the locals. Read more on the newest policy address below.

Hong Kong’s leader heavily emphasised on the matters of national security. In her speech, she stated that the city’s national security is still not up to par, and has a ‘gaping hole’ in it. Additionally, the leader also mentioned there are possible risks which Hong Kong can be vulnerable to. Under the principle of ‘one country, two systems’, Hong Kong has fortified its relation to China, given the advantages that the mainland provides.

In conjunction with that, Hong Kong plans to propose a bill to make amendments to the city’s oath-taking and Legislative Council ordinances. This bill would line up with Beijing’s rule, which disqualifies unethical lawmakers who breach the said oath. Aside from the bill, the Government also wants to boost national security education. Beijing and Hong Kong have mutually agreed on cross-border collaboration in various areas, including technology, aviation and finance. On top of that, the two powerhouses also have made a bond where China will allocate and consequently supply Hong Kong a number of COVID-19 vaccines if necessary.

Other plans to rebuild the city include:

What Does This Mean for Hong Kong Citizens?

The policy address which was postponed for over a month seeks to reduce Hong Kong’s shortcomings and improve the nation as a whole for the betterment. The speech by the Chief Executive touched on containing the outbreak under better control, restoring social order and reviving the economy. Before wrapping up the two-hour speech, the Hong Kong leader ended it by saying that the topmost priority they are aiming to achieve is ‘rebuilding people’s faith in the Government.’

The integration of Hong Kong with China to boost economic links was supported by some while others were less enthused about it. Nevertheless, the speech denoted future efforts in the coming year to be redoubled in order to restore Hong Kong’s former glory.