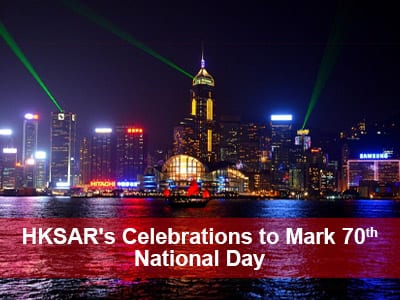 Several major activities will be taking place on 1 October as part of the HKSAR’s 70th anniversary. Among the scheduled activities are:

A Stamp to Remember

The special issue themed stamp will be provided by the Hongkong Post as part of the HKSAR’s 70th anniversary celebrations. A set of four stamps in total are set to be issued. There will also be a special stamp sheetlet with the same anniversary theme.

On top of that, Hongkong Post is set to collaborate on a specially issued stamp booklet. The collaboration will be with the China Post, and the Macao Post and Telecommunications. The jointly issued stamp booklet will comprise of three stamp sheetlets in total, which will be released in se-tenant style. This will showcase the shared joy by all parties involved as they come together to celebrate HKSAR’s 70th anniversary. More information about the stamps is available via the Hongkong Post website and mobile app.

Even More Reasons to Celebrate

The festivities don’t stop there at the HKSAR’s 70th anniversary. Wall banners and lamppost buntings will be set up on the main streets of the various districts. Each will be themed in line with the 70th anniversary celebration. These decorations will also be outside the walls of government buildings, government-designated venues and boundary checkpoints. It’s going to be hard to miss the HKSAR’s 70th National Day celebrations to be sure.

It government is anticipating the eager participation of the community as everyone comes together to celebrate this incredible milestone. As part of the HKSAR’s 70th anniversary, a special website dedicated to this event was launched on 23 September.