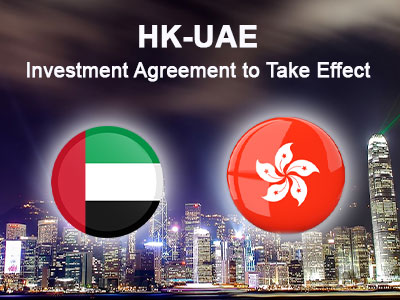 The Agreement was signed in June 2019 and sets out various conditions for the two governments to undertake:

The Hong Kong-UAE IPPA is one of four similar agreement that the Hong Kong current term government has signed since coming into office in July 2017. It is also Hong Kong’s 21st investment agreement signed with a foreign economy. The other three investment agreements have been signed with the Association of Southeast Asian Nations (ASEAN), Australia, and Mexico respectively; with the former two having come into effect as well.

The most recent IPPA was signed with Mexico on January 24, 2020 at the sidelines of the World Economic Forum (WEF) Annual Meeting in Davos, Philippines. This Agreement has not come into effect yet.

It is expected that Hong Kong will continue making dedicated efforts to expand their network of IPPAs and help enhance two-way investment flows to further boost the economy.

Know more about how to start a business in Hong Kong.